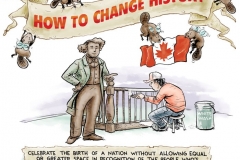 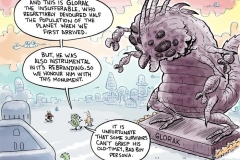 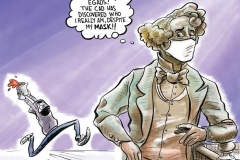 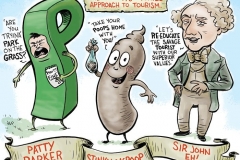 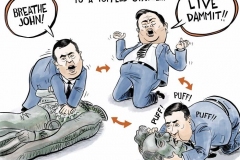 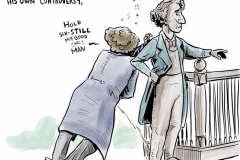 Holding Court, the ironically named statue depicting a young John A. MacDonald defending himself in his first ever court case, and other monuments like it, serve to alter Canadian’s understanding of their own shared history. They redirect our gaze to a blissfully ignorant portrayal of Canada; a storybook version where great men deployed a righteous combination of wit and fisticuffs to forge a shining nation from a rugged, unyielding, and under-utilized land. The mischievous smirk and twinkling eyes of Picton’s John A. sculpture are a thin, maple-flavoured veneer over a cold, murderous figure. They belie the thousands of Indigenous and Chinese people who perished under his steely thumb. Countless lives, carelessly discarded, from coast, to coast, to coast; strewn and scattered throughout the pages of Canada’s creation myth. They gloss over the harm done to generations of Indigenous people, continuing to this day. They overlook this ongoing genocide.

As a cartoonist it’s my aim to sling metaphorical mud at such grandiose figures, living or dead. To expose, ridicule, mock, and belittle them. To portray them not as the myth they purport to tell, but as the flawed humans they ultimately are.

Tim Snyder is an illustrator, graphic designer, syndicated editorial cartoonist, and avid knitter. His work can be seen throughout Prince Edward County in the form of logos, ads, posters, storefront signage, as well as the cartoons on page 7 of The Times newspaper. In his early career he dabbled in animation, direction, and sculpture, with past work having been viewed on CBS, PBS, Playhouse Disney, Teletoon, Family Channel, Nick at Night, and select museums and private gardens. Currently Tim knits, sketches, and paddles in the County with his family.