Twenty local artists invite you to walk through “Intersections: Anti-Racist Conversations about John A Macdonald” – a pop-up art show, including embroidery, paintings, and video installations – being presented in shop windows along Picton Main St on October 3rd and 4th.

“Our rural community has shown a desire to be Anti-Racist. It is important now to take time and wonder how we can create Anti-Racist public spaces. What would that look like? Why? I was very heartened by the overwhelmingly positive response from both artists and downtown businesses in organizing this show,” says co-organizer Shannon Helm. She continues, “Our hope is that this pop-up show will facilitate thoughtful reflection on our history as Canadians, our public spaces and our role as community members in creating safe public spaces that celebrate our shared values.”

Interdisciplinary artist, Kamee Abrahamian, adds her own reflections to the pop-up show with these storefront window photographs. 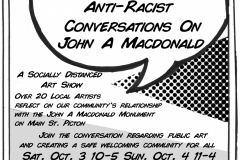 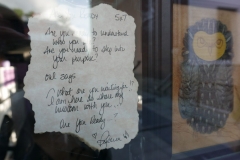 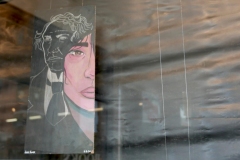 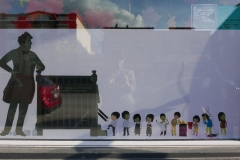 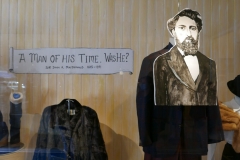 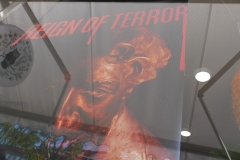 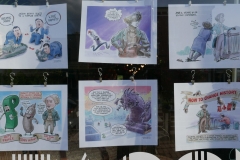 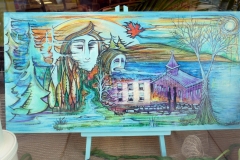 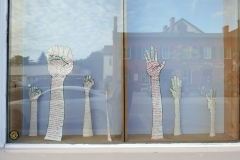 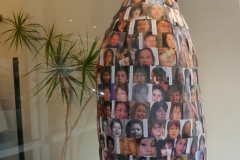 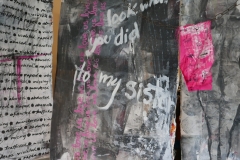 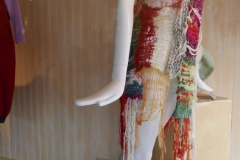 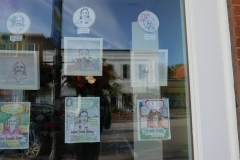 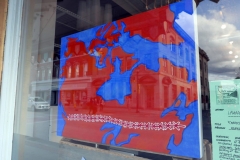 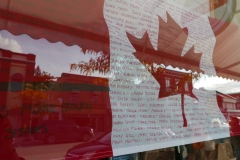 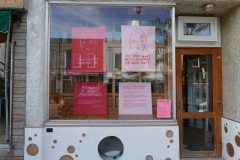 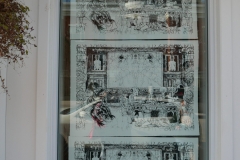 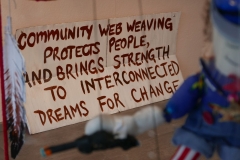 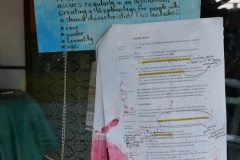 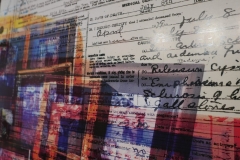 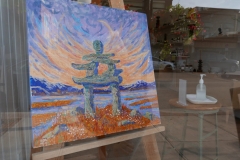 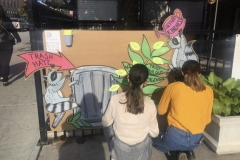 If Shannon Helm had her way, a discussion over the fate of the John A. Macdonald statue in Picton would take place across a dinner table—a big one, placed in the middle of Main Street, with traffic rerouted around, and the whole community invited to share a meal. But in this time of COVID-19, she thought that a pop-up art show examining the community’s relationship with the statue would be the next best thing. She had started a petition calling for the removal of the statue from in front of the library, and she was astonished by the degree of divisiveness that came to light. In her thinking, the statue represents values that are incompatible with the values held in today’s community. “We’re proud of being Canadian, but that doesn’t have to mean that we are proud of John A. Macdonald. I love my community, and wanted people to question why we are propping up this statue. I wanted it to be less divisive. As a community, it is important to have conversations and support each other in making safe spaces,” she said. She had the idea of creating a pop-up art installation in the shop windows along Picton Main Street. The theme would be about anti-racism, particularly about the lasting effects of the residential school program instituted by Sir John A. Macdonald, but she stressed that it would not be anti-Macdonald. “With art, you can take a look and speak to the heart or the spirit, rather than to the intellect. As we come into awareness and knowledge about systemic racism, I think we need to question what we display publicly,” she said. She invited businesses along Main Street to share their window space and then she invited community artists to create pieces with the purpose of sparking a conversation.

The submitted pieces were creative and diverse, ranging from a walking tour along the Millennium Trail, to the settler view from Susanna Moodie, to the harsh experience of residential schools, to the tragedy of missing and murdered Indigenous women and girls. Shannon Helm stands in front of the John A. Macdonald statue on Main Street in Picton. She is the co-organizer of a popup art installation looking at Macdonald’s legacy.

Not all of the participants called for the removal of the statue. Indigenous artist and healer Rebecca Maracle was asked to give the Thanksgiving Address or Ohenten Kariwatekwen, the traditional Haudenosaunee words spoken to open gatherings so that all who are present can express gratitude and align their thoughts with Nature. Each of the 18 invocations end with the words “Now our minds are one.” She said that the statue represents a painful part of her Indigenous history. “I think there needs to be a ‘Lest we forget’ for all of the lives that have been affected by what Sir John A. Macdonald implemented in our history. To take down the statue means we forget part of our history. I  see so many people in different stages of healing, and some barely holding together, because of what residential schools has brought. I’m a product of residential school grandparents, and my grandfather taught me what it means to hold on to culture, to understand our path and to be the light that we are meant to be,” she said. “It is a reminder to me when I look at that statue of the work that I have done to heal, to find my place and to remember who I am.” When asked what should be done with the statue, she said that people should spend more time listening to each other, and not be busy with giving their opinion. “I don’t know what the solution is, but for people that are curious to know the history, it should be a forum where people can come and listen to the history of Sir John A. Macdonald, listen to some of the residential school survivors tell their stories of what they were put through. Having open conversations and listening to each other is a way to heal. The more I’m allowed to talk about it in a healthy way, it frees up space inside to allow more light in.”

Christine Renaud said the statue raises questions of who should be revered and who should be admired. “The issue is whether we revere people who did terrible things to other people, specifically Indigenous, but also Chinese, as Sir John A. did. Whether we have a little [explanatory] plaque, or even a big one, does not remove the idea that we hold what he did—which was to pull together the country—was done in harmful ways to others. I feel the accomplishments cannot outweigh the harm that was done,” she said. She strongly believes the statue has no place on Main Street. She contributed a piece of embroidery to the show, and says that art can open up people’s minds. “This is about anti-racism, and the show is an opportunity to open up a dialogue to look at art and spark thought about this issue.”

Bay Woodyard also contributed to the show with a series of portraits of activist women who she found to be inspiring. “I wanted to do something that was part of the conversation about anti-racism, and I wanted it to be a positive part of the conversation instead of getting people riled up and angry. It’s looking at how people can be more connected with each other, instead of trying to have power over other people, and working in the community with people instead of trying to separate them,” she said. She was very impressed with the work of the other artists in the show. “It was very powerful and emotional for me to see the other work. I really admire the way people interpreted it in so many different ways, and I thought it was a great concept to do it in storefront windows. It really makes art available for anybody to see.